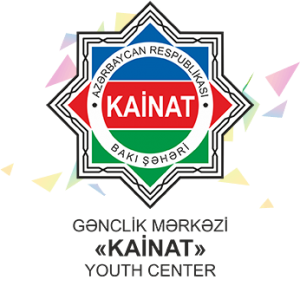 “Kainat” Youth Center was established on November, 1990. According to the legislative basis of 1990s, a Regulation of the Center was confirmed by local executive bodies and an appropriate order was given for starting its activity. Later the Regulation of Center was registered and re-confirmed by the Ministry of Justice on July, 1994 regarding with the fundamental changes made in the country. As a non-governmental organization, according to the provisions of Regulation, the Center is engaged in implementation of projects in the direction of intellectual improvement of children and youth.

A scope of activity of “Kainat” Youth Center basically includes a work with the children, who need social protection and helath restoration. So far, the works performed in this direction became a main principle of the Center collaborators within a short time period. Firstly, organization of exhibition by name “War – at glance of children” under the finance of sponsor organization, preparation of “Puzzle” television game caused big surprise. Some years later the “Kainat” Youth Center began to develop and achieved the implementation of bigger and important projects. Later the Center started implementation of different measures and projects, which became a tradition, with the help of foreign companies and local manufacturers active in Azerbaijan.

The Center closely cooperates with UNICEF, Ministry of Youth and Sport, Ministry of Education and develops and implements mutual projects with the mentioned bodies. The center not only participates in the National Youth Forums, National Council meetings, UNICEF conferences, Children Foundation meetings, but also some members of the Center have participated in the trainings organized by UN Resource and Training Center and obtained a certificate on actual programes covering different fields. This is not a full list of the performed works by the Center.

It should be noted that, the films covering the “early childhood development” consisting of 6 parts produced by the order of UNICEF and with the methods and instructions of the Ministry of Education have been demonstrated in local TV channels and got positive opinion of TV viewers. Besides, the Azerbaijan version of “Happiness of becoming father and mother” film devoted to the early childhood problems has been produced and put into discussion with the support of UNICEF. The recent activity in this field is a “Hayyat” (Life) film produced by the order of “TEXACO” Company, the film is devoted to the activity and future perspectives of Blood Bank to be established in Azerbaijan.

Generally, the collaborators of the Center increase their creative activity and achieve professional skills. “Kainat” Youth Center regularly keeps a close cooperation with local businessmen, enterprises and organizations. Recently many children participated in the projects implemented by the Center are now educated outside the Azerbaijan and participate in different creativity competitions. A work with the refugee and IDPs children is of special care and importance within the activity program of “Kainat” Youth Center.

Besides, recently the Center has held national competitions of knowledge with the direct assistance of the Ministry of Youth and Sport (the 500th anniversary of Safavi state, 800 th anniversary of Nasiraddin Tusi, 10 th anniversary of Azerbaijan Independence, Azerbaijan youth in the process of political and legal reforms), implemented the projects on Civil Society and Azerbaijan realities together with the OSCE Baku office. Recently, the center continuing its activity in this field, achieved the implementation of exact projects on healthy development of teenagers and youth.

“Kainat” Youth Center gives a special care to the mutual cooperation with the National Trade Union Confederation and its local bodies. This activity of the Center has been awarded with special diploma by the national committee of Independent Trade Union of Azerbaijan Culture Staff for “active participation in the social life of republic and trade union activities” in 2004.
Recent activities of the Center is also obviously seen in all directions. Thus, the “Kainat” Youth Center was awarded by the Ministry of Youth and Sport regarding with “the 10th anniversary of establishment of February 2 – Azerbaijan Youth Day” and for its active participation in the implemention of state youth policy.